Top Posts
When the boys met Bear
Teaching digital skills in Southampton with The Post...
Post Office broadband and Google Digital Garage free...
The Tree The Key and Me – A...
Reflexology at Anahata in Brighton
Kids love pesto, a dinner at Cafe Murano...
The great outdoors with kids at Haven, Poole.
Camp Bestival – leave your watches at home...
A creative photography and writers weekend in Somerset
Brighton Self-Care Sunday

When the boys met Bear

Roald Dahl said that kindness was his number one attribute in a human being.  He put it before any of…

The Tree The Key and Me – A personalised book for kids

I remember on a Saturday morning heading to the library with my dad when I was a child. Each of…

Camp Bestival – leave your watches at home and relax

Chilled out parenting I am a pretty relaxed parent (well, not if you saw me trying to get my kids…

A creative photography and writers weekend in Somerset

I pulled over the car to wander in the New Forest with wild ponies, something so peaceful and beautiful.  We…

How to find work that works.

The last time, I entered the stunning reception area of M&C Saatchi was nearly twenty years ago. I was being…

The secret Isle of Wight

I began the Summer researching last-minute trips to a Greek Island.  The weather was rubbish and I was desperate for…

The importance of taking time out

This weekend I was child free for three whole days and nights. This is the first time in six years…

When you laugh until your stomach muscles are hurting, you know it’s been a good night. In the midst of…

Preparing for lift off at Camp Bestival

It’s got to the point where I’m not sure who is more excited, me or the kids?  We had already…

The great outdoors with kids at Haven, Poole.

Dorset is mostly known for the stunning beauty Durdle Door and the lavish homes of the super rich in Sandbanks.  As a family, we visit each year to Camp Bestival at Lulworth Castle, during the drive on the way to the festival we comment on the beauty of the marshland, the birds and woodland we pass, promising to come back on another trip. We never do, until now that is. We were invited to stay at Rockley Park, a Haven holiday park near Poole.  I said yes, after all it is only two hours from us in Sussex and this would be a good chance to explore the area.

We were due to leave on the Friday night of May half-term after school, my husband was ill and the forecast looked shocking.  We decided to get an early night and set off first thing on Saturday morning. The boys woke up at 6am, no alarms are needed in our house, the excitement of a weekend away made them dress quicker than any normal morning and we were in the car, snacking on chocolate  brioche rolls by 7am.

The drive was really easy from Sussex, we followed the coast road and as we headed into Dorset itself, the feeling of calm from the green trees and countryside made us all feel like we were on holiday already.

We arrived to grey clouds and quiet park, it was only 9am and no-one was up, this meant we were in reception before anyone else and after a speedy check-in we headed to our lodge.  The accomodation took our breath away, the kitchen and lounge area led down to a white picket fenced balcony looking directly out to the nature reserve, with the seas twinkling water as far as the eye could see.

Dan was still ill and after the drive just wanted to go to bed.  I had a mild panic, three young kids and I in an unknown place. What were we going to do that could entertain ages four to eight and did not involve swimming (the adult to child ratio means that two adults would be required in the pool with the kids). I need not have worried. Ten minutes later and we arrived to the sport zone, this works on a pay per activity basis or you can buy a ticket that will give you stamps on, each activity costs you a stamp and this would be ideal with older kids to give them freedom to do what they choose without handing them the money (to potentially get spent in the amazing onsite shop).

The elder two boys went on the bungee trampolines, then they all flitted between five aside football (anyone could play and they made their own teams up), climbing frames and crazy golf.  Due to the excellent system of having only one door for people to come in a out of this area, I could manage to keep an eye on all three, without having to keep them on a tight leash. I did paint a pot (or a pirate in his case) with the middle one, we all had ice creams and as it approached lunchtime we ventured into the on-site shop and had freshly made sandwiches and snacks. The boys began choosing a treat for the holiday and the younger two chose a cuddly toy each, one of the Haven characters that had seen in the playground and cuddled.

Dan felt better after lunch and we all went swimming in the indoor and outdoor pools, the boys did archery, a pool disco, had their faces painted and went to the entertainment for children in the main theatre where they danced and sang with huge smiles on their faces.

At times we split up, there were a few things that the four year old was too young for and I had plenty of alternatives for him (including the arcade where we raced some cars and played with the 2p coin tipping machine, feeling like a lottery winner each time we knocked some 2p’s off the moving shelf. 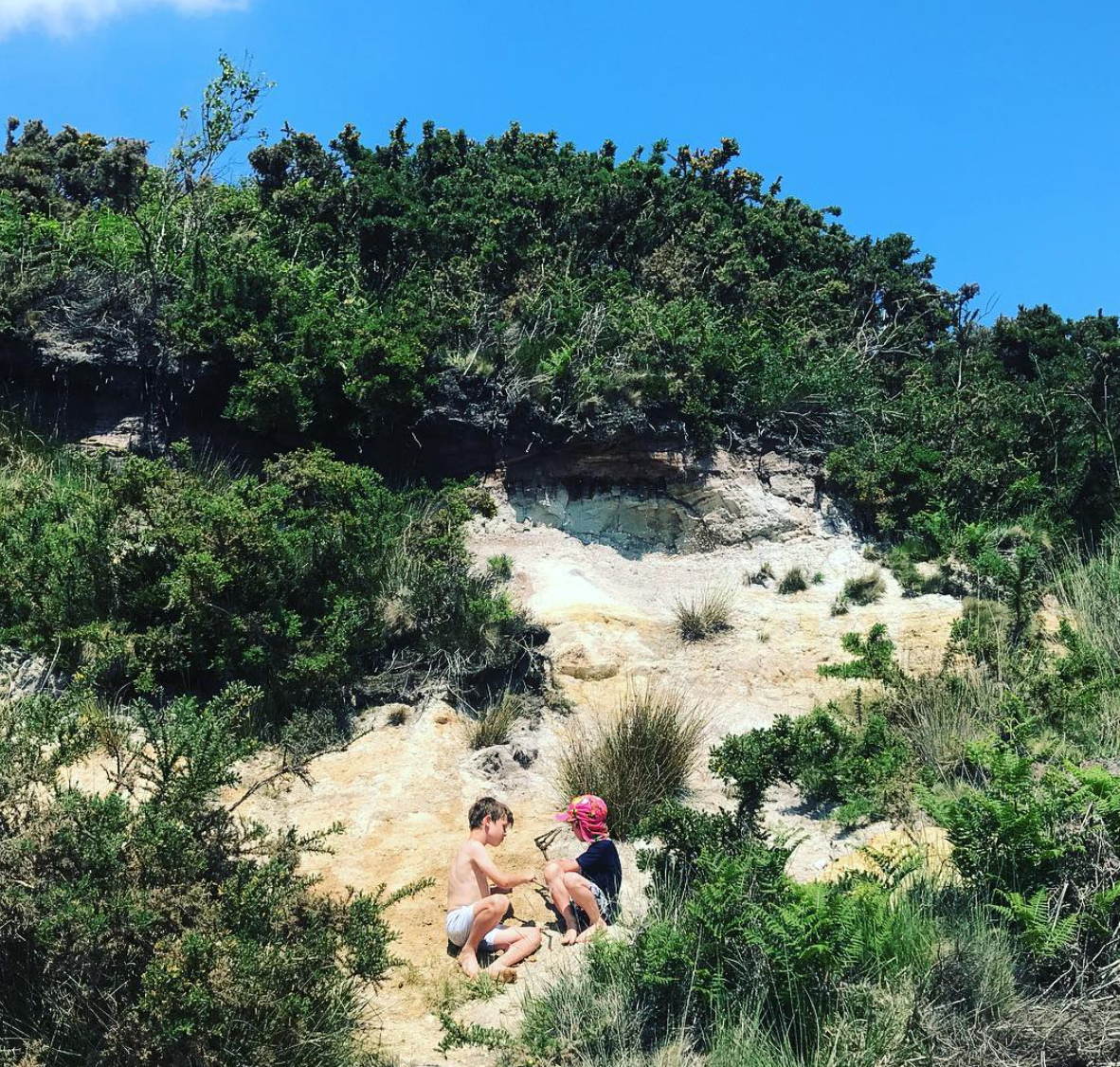 One thing that we all enjoyed was walking down through the park to the beach.  The hedgerow leading from the main centre had a path cut though it for the kids to weave in and out, I only saw my children doing this, maybe it was so well disguised no-one knew but we loved the little touches similar to this around the park.

Heading down through the pine trees, to the sandy beach, the boys said that it reminded them of Sardinia, they were right. The amazing Rockley Watersports Centre below rented out a speedboat to us, we went crabbing and had hot chocolates watching the sun go down each night on the sandy beach while the boys played on the playground, bare footed in the sand.

Getting back to nature

As a family, we love the outdoors. Three lively boys means that we need to get them out of the house each day anyway but we always opt for woods and open spaces where possible rather than built up areas, soft play or paid for attractions.  Rockley Park exceeded all of our expectations and despite the slightly soft mattresses (we love hard ones) it was faultless. At one point, Dan mentioned the idea of buying a lodge (they are like smart, static caravans) and being able to use it at weekends.  There was a tippee with bush ranger present, optional camp fire building, bird watching, a nature trail and this was all in the centre of the park, discreetly nestled between the caravans.

On our second day, we headed into the nature reserve, it was a two minute walk from our lodge and through some beautiful woods. We set up our hammock under some trees, laid out a picnic and swam in the shallow waters with the kids building castles out of stones. This day wasn’t like Sardinia, this was better than Sardinia.  There wasn’t one person there other than us. With so much to do in the park and on Rockley beach itself, I wonder if people simply don’t want to explore further, but if you do visit then the ten minute walk down the hill will reward you with tranquility and peace. Just don’t tell anyone else and you will have it all to yourselves.

There is no doubt that we will go back to Rockley Park, I am almost too nervous to try another park in case it isn’t a good as this one but we will.  This is a holiday that worked brilliantly for us, the kids are already asking to go again soon.

Camp Bestival – leave your watches at home and relax

Kids love pesto, a dinner at Cafe Murano with Sacla

Reflexology at Anahata in Brighton

Festivals with kids – here’s what you need...

How to find work that works.

Aww, looks like you had a great time. I love those holidays were you can just relax, have a base that is usually a holiday park or something with attractions on site but then its near enough to other things to keep the kids busy, especially the beach – Keeps the kids busy and so cheap! . We are going on a similar type of break this week for half term.

Hi, I’m Kate. I live near Brighton in Sussex with my husband Dan, and our three very energetic boys, who are all under under the age of six. I started this blog as a way to record the ups and downs of our roller coaster life together, and to share my attempts to keep us all entertained. Some successful, some not so successful! I am also a freelance social media manager – I recently qualified as a Digital Mum – and am editor for Mumsnet West Sussex. Click on my picture to find out more.

WALKING IN THE RAIN: FREE SAMPLER

WASHING UP IS GOOD FOR YOU: FREE SAMPLER